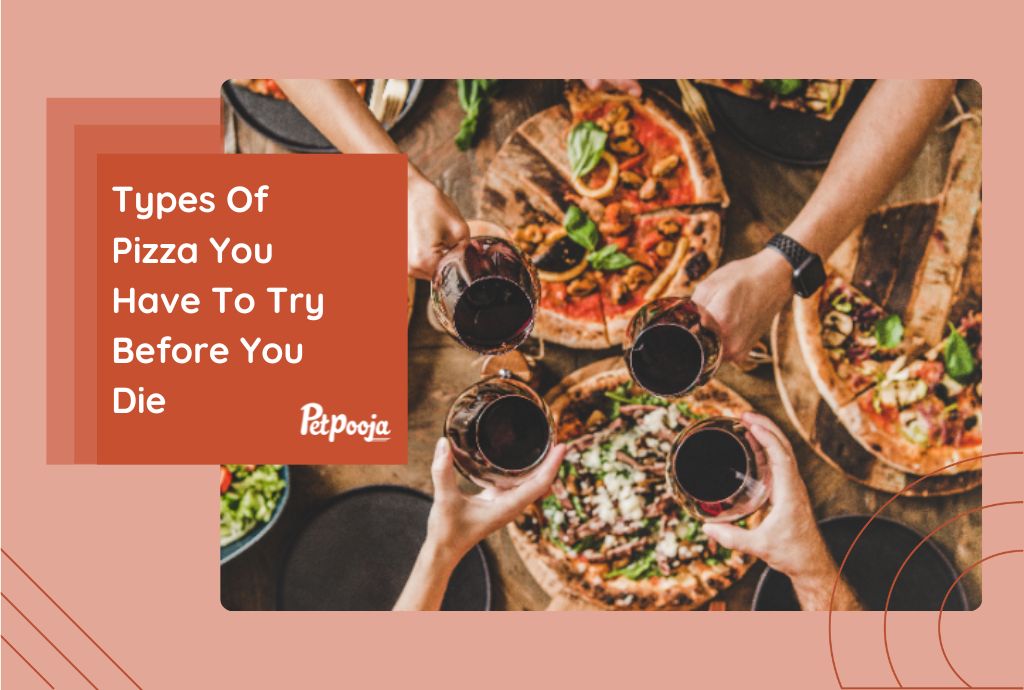 There is nothing that a slice of pizza cannot fix! And for every mood, there exists a different type of pizza for you.

The origins of the beloved food can be traced back to ancient civilizations in Italy, where flatbreads were topped with oils, herbs, and spices until they became what it is today.

The modern version of pizza, with a tomato sauce and cheese topping, originated in Naples, Italy in the late 18th century.

From teenage mutant ninja turtles to Julia Roberts in Eat Pray Love, (weekend idea: watch both these movies while eating a slice of pizza) no one has been able to resist the charm of the best invention by mankind.

In this article, we explore major types of pizza that exist out there that you must give it a shot once in a lifetime!

Must Try Pizzas From Around The World

When it comes to pizza, there are so many delicious variations to try. From classic Margherita to more unique and exotic flavours, there’s a pizza out there for everyone. And with so many different types of pizza bases to choose from, the options are endless.

A thin crust is a type of pizza crust that is characterized by its thin, crispy texture. It is made from a variety of flours, including wheat, cornmeal, and semolina, and is usually stretched by hand to create a thin, round shape.

Thin crusts are typically baked at high temperatures to achieve a crispy texture and are often topped with a minimal amount of sauce and cheese to allow the crust to remain crispy.

This type of crust is widely marketed to cater to those who prefer a crispy, crunchy texture in their pizza.

A thick crust is characterized by its thick, fluffy texture and is often baked in a deep pan to create a deep dish shape. Thick crusts are usually softer and less crispy than thin crusts and can be topped with a wide variety of ingredients.

They are a popular choice for those who prefer a softer, more pillowy texture in their pizza.

A stuffed crust is made by stuffing the outer edge of the crust with cheese or other fillings before baking.

The fillings are usually placed inside the crust along the outer edge, and the dough is then folded over the top to enclose the fillings.

Stuffed crusts are a popular option for those who love cheese and want an extra layer of flavor and texture in their pizza.

The fillings used in a stuffed crust can vary and can include ingredients such as mozzarella cheese, cheddar cheese, pepperoni, and sausage.

Already craving for a slice of some ‘zza? Well, let’s tempt you some more So, without further ado, let’s delve into the types of pizza you have to try

Planning to start your own pizzeria? Here is a list of must-have equipment

This classic pizza hails from Naples, Italy. It was originally exclusively cooked and eaten by peasants because it contained tomatoes, which were falsely believed to be deadly. However, it ended up being extremely tasty.

The Neopolitan Pizza is made with soft, chewy dough and fresh, high-quality ingredients. The base is traditionally made with just flour, water, salt, and yeast, and the toppings are kept simple with just tomatoes, mozzarella, and basil.

While the best Neapolitan can obviously be eaten in Naples, there are some pizzerias in India known for this type of pizza:

Tip: If you ever start your own pizzeria, make the interiors interesting to attract customers. Click here to learn how!

Ike Sewell, the owner of Pizzeria Uno in Chicago, is credited for creating Chicago-style deep-dish pizza in 1943. This hearty pizza is a must-try for anyone visiting the Windy City.

The base is made with a thick layer of dough that’s pressed into a deep dish pan, and then topped with layers of cheese, meat, and vegetables.

Since the deep dish is baked for longer, the cheese is put at the bottom of this pizza.

Wondering where to try it? UNO Chicago (the inventor) has multiple chains across India, including Kolkata, Delhi, and Bangalore

Sicilian pizza, is a type of pizza that originated in Sicily, Italy. It is characterized by its thick, fluffy crust and rectangular shape.

One of the defining characteristics of Sicilian pizza is its thick, fluffy crust, which is about an inch thick and has a soft, spongy texture.

In terms of toppings, Sicilian pizza is typically topped with a variety of ingredients, such as tomato sauce, cheese, onions, anchovies, and olives.

Sicilian pizza is a popular choice at pizzerias and restaurants around the world. It is often served in large, rectangular slices that are perfect for sharing with friends and family.

Greek pizza, also known as pita pizza or gyro pizza, is a type of pizza that originated in Greece and has become popular around the world. It is characterized by its thin, crispy crust and flavorful toppings.

This unique pizza is made with a crispy, puffed-up base that’s topped with a variety of Greek-inspired ingredients like feta cheese, olives, and roasted vegetables. It’s a refreshing change of pace from the traditional tomato sauce and mozzarella.

The pizza is then baked in a wood-fired or gas-fired oven to give it a crispy, charred exterior and a soft, fluffy interior. Here are some places to try a good Greek pizza:

This sweet and savoury pizza is a fan favourite, and for a good reason. It’s made with a crispy base, topped with BBQ sauce, grilled chicken, onions, and cheddar cheese. It’s the perfect combination of flavours that will have you coming back for more.

The toppings for a BBQ chicken pizza typically include BBQ sauce, diced or shredded chicken, and cheese. The chicken is usually cooked and seasoned with BBQ sauce before it is placed on the pizza, which helps to infuse it with flavour.

The cheese is usually a blend of mozzarella and cheddar, which provides a balance of creamy and sharp flavours.

Other toppings can be added to a BBQ chicken pizza, such as onions, bell peppers, mushrooms, and pineapple. These toppings can add flavour, texture, and nutrition to the pizza.

When St. Louis pizza is presented, pizza lovers are unable to contain their excitement. In Amadeo Fiore’s restaurant, this pizza had a modest beginning.

The addition of Provel cheese, a combination of three different kinds of cheese, is what made St. Louis pizza a runaway success.

What is the secret behind the popularity of pizza in St. Louis? In addition to being smothered in Provel, it develops brittle, cracker-like crusts (because yeast is not used) with copious amounts of bacon and an oregano-infused sauce. Usually, people offer it sliced into squares as a celebration appetizer.

In case you and your guests are already too stuffed, doing this also makes it simpler to store your cooked pizza in the refrigerator.

Due to its wonderful flavours, Roman pizza, which has its roots in Rome, has spread to restaurants all over the world. To distinguish it from pizza Alta, it is also referred to as pizza Bassa (low pizza) (high pizza, which is also Neapolitan pizza).

Roman pizza comes in two shapes: a round pizza and a rectangular pizza. Consumers will often eat the latter at home as takeout while dining out on the former, which also has more oil than its counterpart.

Instead of using more tomatoes, Roman pizza favours chives and olives. The pizza holds up nicely even when you put on extra sausage and sharp cheeses, which melt beautifully in the electric oven because it has thick, bubbly crusts.

Pizza from Quad City isn’t very well known, but it should be. The pizza is served in strips rather than rectangular slices and incorporates malt in the crust. Fennel sausage, which often rests beneath the cheese, and a fiery tomato sauce are among the toppings.

This pizza’s flavour is out of this world because of its wonderful ingredients: the toasted, nutty flavour of the malt is complemented by the sweet, earthy flavour of the fennel-infused sausage. The tomato sauce on Quad City pizza is perfect if you enjoy your pizza hot.

Other Popular Pizza Toppings Around The World You Should Try

Many creative and unique combinations can be found around the world. Some examples include:

Are you a pizzeria owner? Then here’s how you can market your amazing pizzas and restaurant business like a pro! Check out Tvito– and make your food creatives in under a minute!

So there you have it, the top types of pizza you have to try before you die. And don’t forget, there are many different types of pizza bases to choose from as well, including thin and crispy, thick and chewy, and everything in between. So go ahead and explore all the delicious variations of pizza out there and find your new favourite!

Anukriti Singh
A strategist by the day and writer by night, I find solace between books and coffee cups. A firm believer that words are the most powerful tool of the humankind
Share
Linkedin
WhatsApp
Pinterest
Facebook
Twitter

Food Habits From Global Cuisines That Every Restaurateur Should Know About