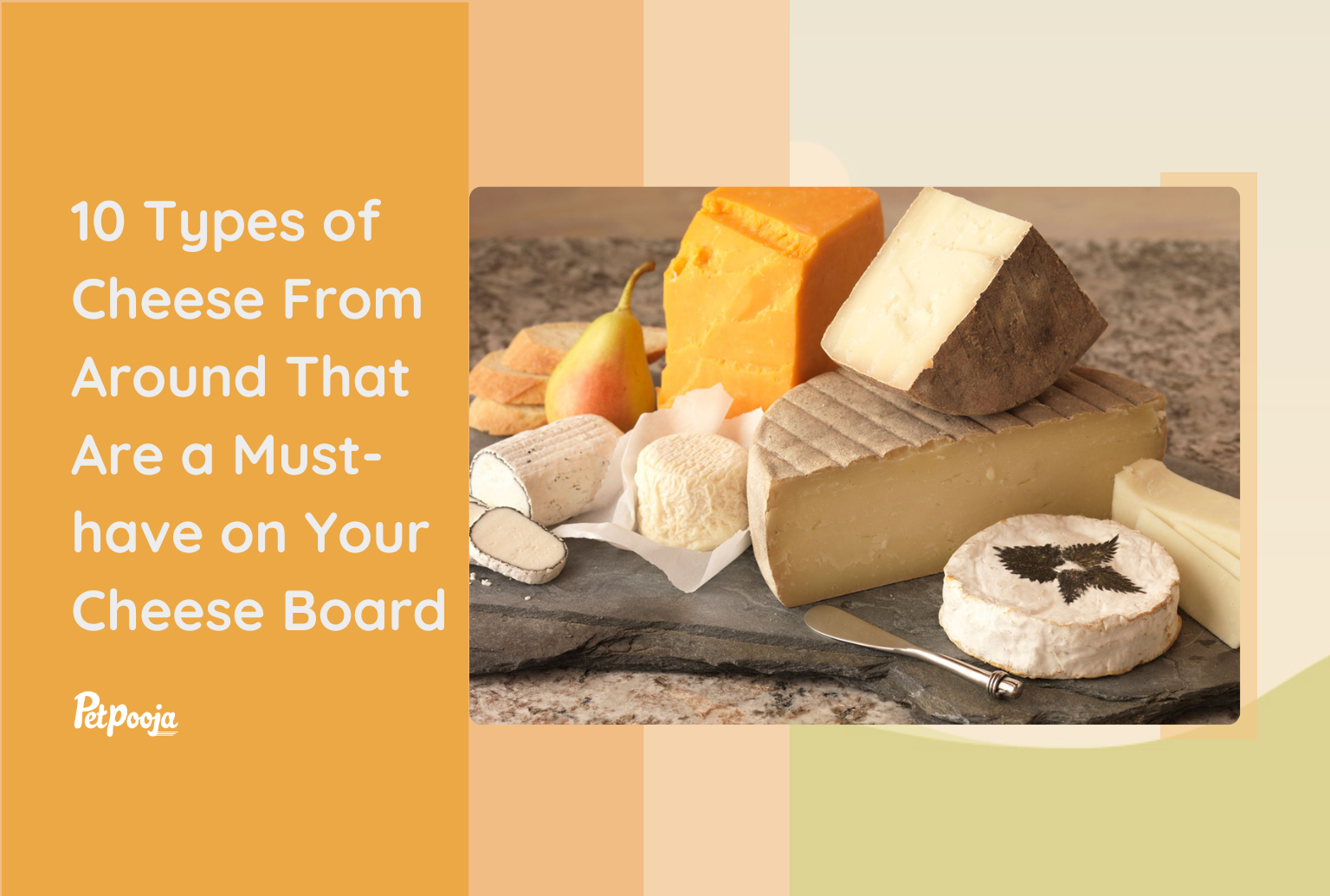 Ah, Cheese! That silky, creamy block of heavenly goodness. Historians have found evidence of cheesemaking in various cultures, dating back 4000 years. One of the best inventions of humankind, cheese is an integral part of almost every culture and there are many types of cheese, available in myriad forms and shapes.

Depending on who you talk to, there are five to seven different types of cheese. These include cheeses with varying textures, ones manufactured with mold, and ones made using milk from cows, goats, or sheep.

In this article, we spill the cheese on the different types available across the world. Keep Reading!

Most Popular Types Of Cheese

Before we embark on a cheesy rendezvous across the globe, here’s a glimpse of the most common and popular types of cheese:

This well-known orange-hued cheese is manufactured from a combination of cheeses (including cheddar and other similar cheeses), as well as milk byproducts, which enable it to melt without separating or becoming greasy as traditional cheeses might. This type of cheese is the best cheeseburger topping ever. (BRB…I need a burger in my system)

The best recipe to get rid of your Monday blues is to whip up a delicious salad with some blue cheese and a glass of wine! What’s the secret to this strong cheese? It’s mold! A penicillium mold strain is added to cheese manufactured from cow, sheep, or goat milk before it ages.

There are various types of blue cheese, all of which have a sharp, salty flavor with undertones of sweetness: Gorgonzola is an Italian blue cheese; Roquefort is a French blue cheese and Stilton is an English blue cheese.

In the 1870s, a dairyman in New York state came up with this popular bagel spread. He made his cheese from a mixture of milk and cream. The resulting curds were stabilized and pureed after the whey was removed, creating the silky, creamy, and slightly sweet fresh cheese that has become a classic and every dessert lover’s blessing in disguise.

You might know it as the cheese which makes your pizza so delicious. Mozzarella is one of the most widely used cheese in the world. Cow or water buffalo milk is typically used to make mozzarella. To make it, fresh curds are heated to help more whey drain out before being stretched and allowed to cool in the water. This mild Italian cheese is available in a variety of shapes, including string cheese, burrata, bocconcini, and bite-sized mozzarella balls that have been covered in cream.

RECOMMENDED READ  How To Open A Trendy Go-To Pizza Shop For Your Customers?

Types Of Cheese Across The World

Let’s do a little workout before having some cheese, shall we? Walk to your fridge and count the types of cheese you have in there. You might find a block of processed cheese for delicious sandwiches, or mozzarella in the freezer to bake fresh pizzas. You might even find some parmesan. However, if this is where your cheese collection ends, you are in for a surprise! This is a list of types of cheese popular across the globe which you might not have heard about:

Despite its name, this type of cheese has nothing to do with Asia (I can’t be the only one who made that connection?). Asiago originates from Italy. There are two varieties of this Italian cow’s milk cheese: pressed and matured. Pressed Asiago is a young, semi-soft cheese with a creamy texture that is sweet and nutty; ripened Asiago is more similar to parmesan because it has been salted and matured. Either way, you can’t go wrong with this type of cheese.

The favorite cheese of Benedict Cumberbatch….just kidding! We don’t know his favorite cheese. Yet. The French-origin Camembert is known to have similarities with Brie. However, despite their many similarities, brie and camembert are two quite different types of French cheese. Compared to brie, camembert is richer and has a more potent flavor. It is sold on smaller, 5-inch-diameter wheels. Despite being extremely rich, it is less creamy and runny than brie and has strong buttery and mushroom overtones.

Tip: When pairing a type of cheese, think about contrast. Choose opposite flavors for the best experience

This type of cheese made from cow’s milk is unique and comes from Michoacán, a state in Mexico. The texture of Cotija is creamy and milky, with a distinct sour flavor. It has special physical characteristics: It has an adhesive nature and doesn’t melt, making it the ideal garnish for the traditional dish elote (Mexican street corn). Additionally tasty, Cotija can be grated or crumbled over salads, enchiladas, soups, and tacos.

Manchego, the most well-known cheese in Spain, is produced in the La Mancha region, south of Madrid, using sheep’s milk. Since this type of cheese doesn’t melt well, it’s frequently served as a tapa along with bread, olives, and Serrano ham or combined with membrillo, a sweet quince paste.

This traditional Dutch cheese goes back to 1184, making it one of the oldest types of cheese ever discovered. It’s a semi-hard cheese commonly manufactured from cow’s milk, and it’s renowned for its flavorful, caramelized richness and springy texture. Younger goudas are pleasant as table cheese; older goudas will seem more crystalline and have a flavor that is typically rich, nutty, and buttery.

The list of cheese across the world doesn’t end here. However, too much cheese can be bad for the heart. A delicious and versatile ingredient, cheese has had the world wrapped around its little string. Go and try some delicious new cheese today and have a wonderful experience. We hope this was a helpful read. For more content like this, follow us on Instagram.

Anukriti Singh
A strategist by the day and writer by night, I find solace between books and coffee cups. A firm believer that words are the most powerful tool of the humankind
Share
Linkedin
WhatsApp
Pinterest
Facebook
Twitter

Food Habits From Global Cuisines That Every Restaurateur Should Know About