The Rice and Rise of Biryani! 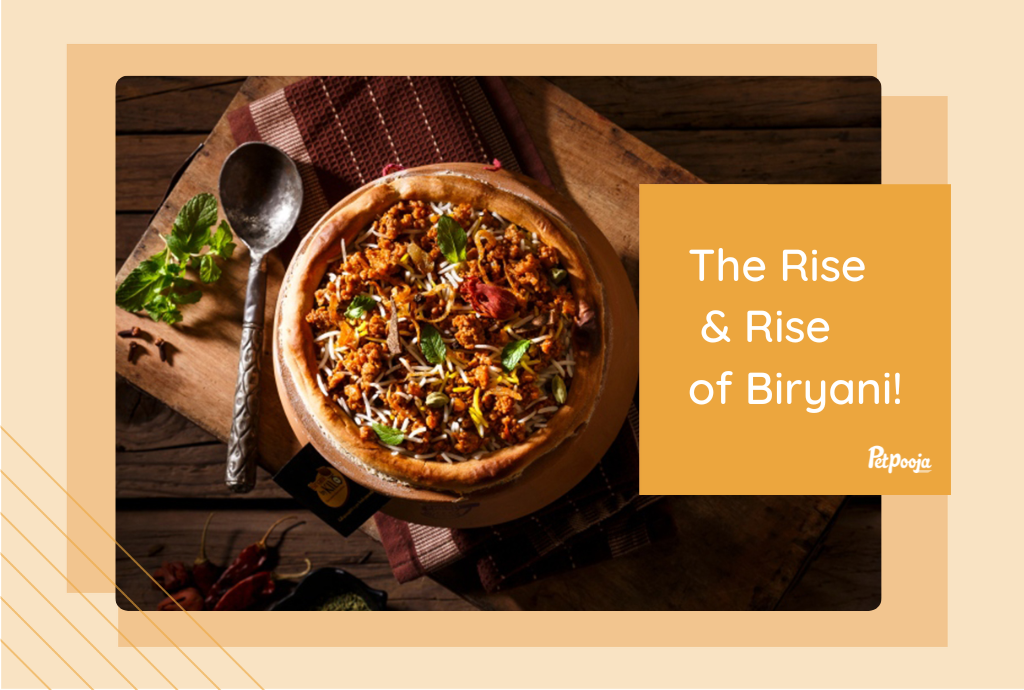 Step aside dear Pizza, the biryani is here!

The biryani business has taken a huge leap, to become the highest sold food-item online. But what does mass production mean for a traditionally slow-cooked dish and its subtle regional variations?

With the growing culture of ordering food-online, a lot has changed. But this dish remains a constant in India’s culinary palate. Last year, was a year full of shocks and surprises and the Indian food industry saw a massive rise in the food-ordering culture.

AT AN ESTIMATED 43 ORDERS A MINUTE, BIRYANI IS THE MOST SOUGHT AFTER DISH ON SWIGGY

The story of the rise in Biryani sales begins with this fundamental change in the way we consume food now. And it wasn’t as if Biryani suddenly got popular. It’s been a staple meal for many across the country for decades, now; way before the advent of third-party delivery platforms. However, advances in Food-Tech and the rise of internet services completely changed the ball game. Growth in India’s food e-commerce sector has made Biryani more accessible and convenient to order.

A FICCI-PWC report, published in December last year estimated the organized biryani delivery business industry at Rs 2,500 crore in 2018. To get some context, the organized industry itself forms under 30% of the market. Such is the love that Indians have for this dish!

On a lighter note, netizens have been embroiled in a never-ending fight about what makes a true Biryani

Let us know your opinion on the topic in the comments!

How did Biryani become an online Cult?

The rise of ordering Biryani online corresponds with the general rise of online ordering. Several factors led to Biryani becoming the preferred food for millennials:

While all these factors created a demand, several Cloud/Dark/Ghost Kitchens (names are often used interchangeably) rose to satisfy the surge in demand. Traditional biryani players also upped their game! Biryani became the food of choice for these players, not just because of demand but several other factors:

The best biryanis – powered by Petpooja!

Petpooja powers some of the biggest names in Biryani business including Thalapakatti, Thalassery and Sanjha Chulha. And Biryani is big business. Thalapakatti, which produces over 7 tonnes of biryani, raised Rs 260 crore to expand it’s already large footprint of 70+ outlets.

By the sheer numbers, you can guess the scale of the operation. Each outlet is large format, covering multiple floors and several areas. The bill volume is also massive in each outlet. Such an large operation has several requirements

The mammoth operation also requires complete tracking from production to sale, for which Petpooja has implemented a SAP integration for them. In Petpooja’s Restaurant Management Platform, they have not only found a POS, but a reliable technology partner which allows them to scale with ease.

So whether you are an independent Biryani outlet or a large chain, you can be at ease knowing Petpooja has your back!

Shaival Desaihttp://blogpetpooja.wordpress.com
Shaival is the Chief of Growth at Petpooja. Apart from jumping from one corridor conversation to another, you will always find curiously wandering about SaaS products, technology & food trends. Reach him at shaival.desai@petpooja.com.
Share
Linkedin
WhatsApp
Pinterest
Facebook
Twitter