Bartenders vs. Mixologists: What’s the Difference? 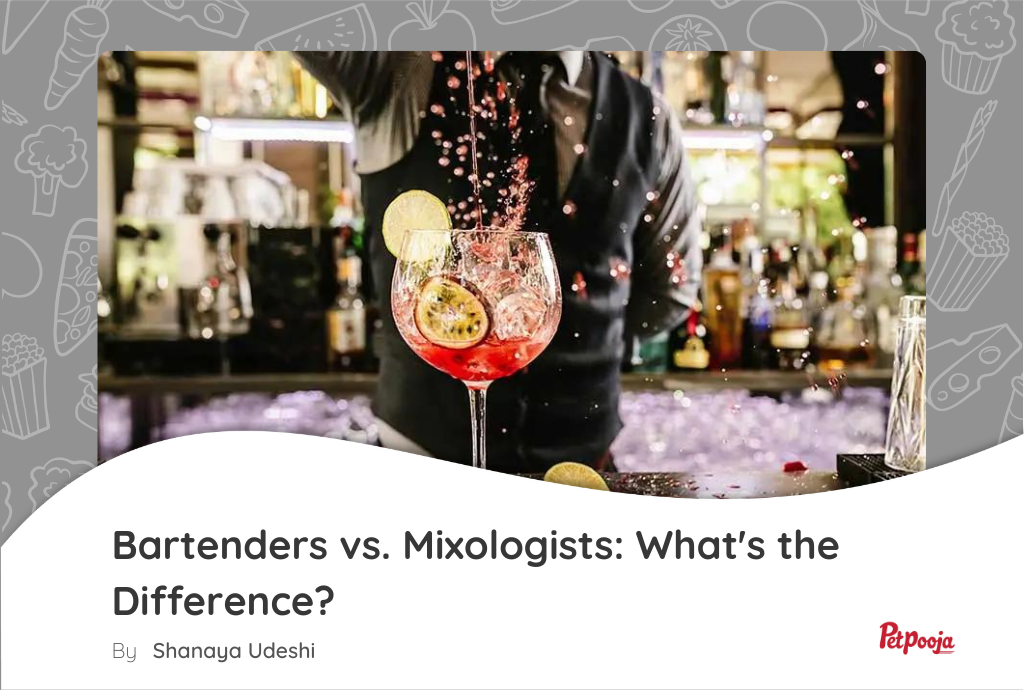 This line is what separates bartenders from mixologists.

Who is a Bartender?

In simple words, a bartender is the one who tends to the bar. Bartenders are primarily responsible for two things:

First, the task of concocting the delicious potions called cocktails.

Second, simply pouring a drink for you to enjoy.

Bartenders exist to serve the customers. While mixing drinks is important, customers are an equally important part of the profession. A major chunk of a bartender’s earnings comes from happy consumers and loyal customers.

It is a universally known fact that the personality of a good bartender is as much responsible for running a successful bar as are his lip-smacking cocktails.

Who is a Mixologist?

Up until a few years ago, bartending was considered more of a hobby than a full-time job. Thus, in order to bring authenticity and respect to the profession, the term mixology was coined. Plainly put, a mixologist is a modern term for a bartender.

It is believed that a 19th-century bartender and saloon owner named Jerry Thomas was the founder of mixology. He was nicknamed “The Professor” due to his analytical approach to experimenting and concocting cocktails.

Thus, a mixologist is someone with a passion for learning the intricacies of preparing a cocktail. They use the chemistry of ingredients to produce a unique drink or an enhanced rendition of an existing one.

What is expected of a Bartender?

A bartender’s job is a wholesome mix of making drinks, interacting with customers, assessing their preferences and needs and making recommendations accordingly. Bar owners hire bartenders with strong people skills who have to stay guest focused and are responsible for enhancing customer experience during every visit.

What is expected of a Mixologist?

A mixologist, on the other hand, is someone who studies, prepares and invents drinks by exploring flavours and experimenting with newer taste profiles. They are more focused on creating novelties rather than serving them. They prefer bringing together their masterpieces behind-the-scenes rather than being behind the bar.

Difference between Bartenders and Mixologists

This bartender vs. mixologist debate is one of the oldest ones going on in the industry.

In today’s day and age, specialization is viewed as the key to knowledge and a specific job description is demanded by both hirers and hirees. Mixologists are a vital part of the food and beverage world.

RECOMMENDED READ  How To Set Liquor Prices For Your Bar & Restaurant?

Many MNCs and corporates are getting involved in creating new alcoholic beverages and the competition in the field is cut-throat. At such a crucial time, mixologists are being sought from far and wide, with very specific academic and taste profiles.

Companies are emphasizing on hiring mixologists with a sound sense of taste and a knowledge of the science of mixing ingredients to come up with some of the best cocktails in the world. Many believe mixology is a dying art and needs saving. Therefore, a variety of top universities in the world also offer courses to study and save the art of mixology.

But, bartenders are not far behind. The drinking scene in India is taking a turn for the better and advancing by leaps and bounds. Restaurants and bars are shelling big bucks for professional bartenders. Bartenders with a knack for drawing customers and establishing long-lasting professional relationships with them for the benefit of the bars, shine out.

A skilful bartender with years of experience under their belt is also asked to engineer the beverages menu and manage the inventory for the bar at restaurants.

Hence, while the common ground between bartenders and mixologists is alcoholic beverages, there are some clear distinctions between the two. This makes them two separate professions which overlap in certain elements. Even though it is a standard practice of interchanging and using the terms bartender and mixologist, many masters of the craft are not happy with the same.

In an interview with The Print, Yangdup Lama India’s top and one of the most renowned bartenders of the world, does not appreciate being called a mixologist. He was quoted saying “Mixologist is a more modern term. People who have created a couple of cocktails that are unique to them, like to refer to themselves as mixologists. But there is no difference between a mixologist and a bartender.”

Shanaya Udeshi
From being a practicing lawyer to a writer, the only thing that has remained constant about me over the years is my love for food. I talk food, dream food and now even write about food!
Share
Linkedin
WhatsApp
Pinterest
Facebook
Twitter

What Is The Cost To Open A Bar In India?